A study, published in 2019, explored the possibility of a growing epidemic of developmental delays in preschool-aged children. The results were not reassuring. 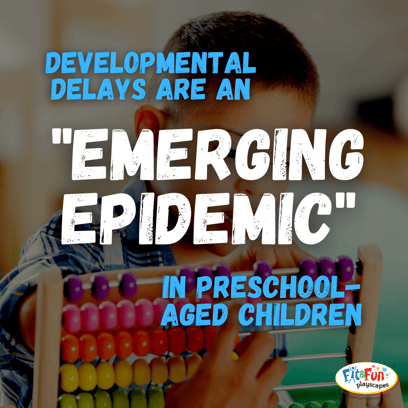 The participants in the study were a convenience sample and secondary data analyses from six previous studies across five different states, those states being Alabama, Louisiana, Ohio, South Carolina, and Texas. The studies took place between the years of 2010 and 2017, and included a total of 580 children, 296 of which were girls. Self-reported races among the categories, with n referring to total number, were "Black (n = 232), Hispanic or Latino (n = 116), White (n = 182), and Other (n = 50)," (Brian et al. 2019). 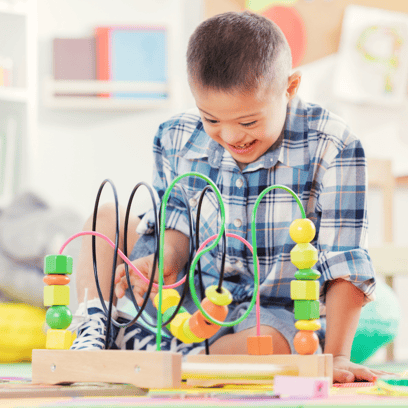 Motor Competence, or MC, can be defined as an individual's ability to proficiently perform a series of locomotor and object control skills that allow the individual to properly perform everyday tasks, such as jumping, hopping, running, and walking. In children, adequate motor competence allows for easy participation in games, free play, and sports activities. Of note, " ...MC does not occur simply as a results of maturation... MC is a developmental construct that should improve over time as a result of consistent developmentally appropriate experiences that consider the child, the task, and the environment," (Brian et al. 2019). In other words, children have to consistently practice and participate in motor competence activities to improve the skill.

Developmental Delay, or DD, is often used in reference to "gross motor DD," or those in early childhood who exhibit poor development of gross and fine motor skills, speech and language, social and personal skills, and activities of daily living or cognition. That definition comes with a catch, however, and the study is important to note that point. "Importantly, what qualifies as DD is open to substantial interpretation as individual states are charged with determining their respective DD criteria," (Brian et al. 2019).

In other words, what is or isn't DD is poorly defined.

"Unlike the percentage of preschool children who fail to meet PA [physical activity] guidelines... alarming proportions for all DD categories were found for the locomotor and object control subscales," the authors wrote.

That's not the only interesting (and perhaps, frightening) finding the authors discovered. 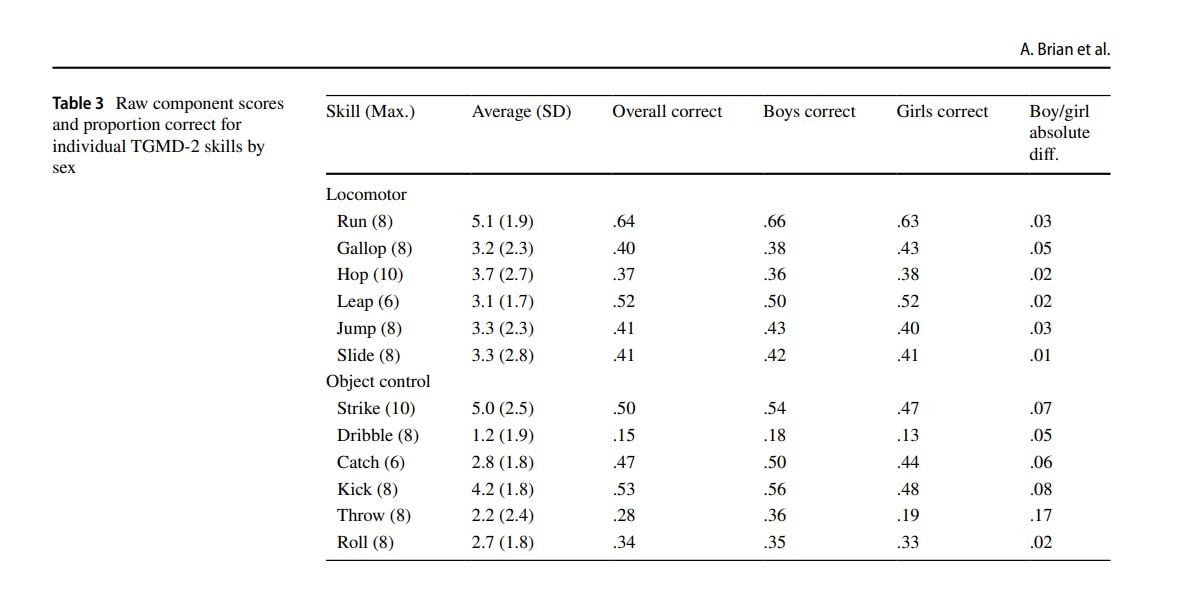 There are a few stand outs in the above table: 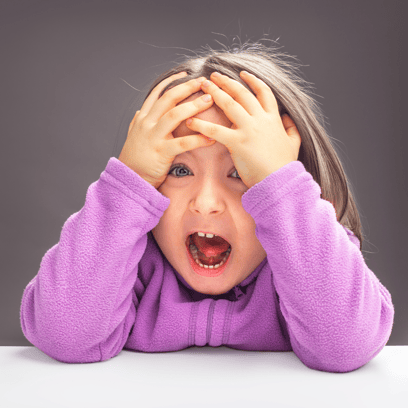 There are a ton of takeaways from the data, many of which are outlined by the authors of the study.

First, and specifically relating to girls having greater difficulties than boys with object manipulation skills, the study calls for a systemic structural/policy change in providing MC-based activities to children. "Systemic structures/policies should be employed to provide comprehensive MC opportunities and supports to all young children, not just those perceived as 'disadvantaged,' with special attention placed on object control skills for girls," (Brian et al 2019). Additionally, the study calls for interventionists (in this case, specialized educators) to pay specific attention to dribbling, hopping, and throwing to combat the MC discrepancy between young boys and girls in the US. The authors are specific to note the USA here, as these same discrepancies, while present, are not nearly as drastic in similar studies conducted in European countries.

Second, the lack of a standardized definition of DD (developmental delays) is negatively impacting the ability for children, aged 3-6, to be properly diagnosed, which in turn harms their ability to improve MC. "The ambiguity of DD cut-off levels used across the USA speaks to the lack of attention to this potentially critical child development and public health issue," (Brian et al 2019). The authors of the study then call for a standardized definition of DD to be used in all states.

Third, Brian et al. warn against lowering the threshold for a DD diagnosis due to the "stark consequences" it would have on the ability for children to receive specialized services from the school and/or state. These consequences, i.e. delays in receiving services, would cause fewer children to qualify for the services, even though they probably should receive them. "As the TGMD-2 [Test of Gross Motor Development, Second Edition] may be used as one component of a disability diagnosis, the high percentage of students that demonstrate very low MC suggest that it is vital to acknowledge this movement issue and to the potential danger in shifting norms," (Brian et al. 2019).

Fourth, the data suggest children in the USA are experiencing a rapid decline in gross motor development - a decline which has, in recent years, been exacerbated by the COVID-19 pandemic. There's a reason for this: in the USA, development of motor skills in early childhood tends to be relegated to the time spent in free play, as opposed to any curriculum-based lesson plan, as might be found in Europe. The authors note this is likely due to an oversight by school districts attempting to meet the CDC's 60 minutes of physical activity per day guideline, which has been set as a requirement in many states (and is a good thing, in our opinion). However, Brian et al. notes that "free play is not sufficient to promote development of MC, as many children in the current study (25-30%) did not have adequate MC skills to successfully interact with other children and/or their environment."

Additionally, the lack of adequate MC skills further exacerbates the ability for children to successfully "play," which is vitally important to the idea of improved health and academic outcomes in the classroom. "In essence, children's capability to effectively 'play' in many environmental and social contexts (e.g., playground equipment, games, sports) is dramatically hindered when they lack the capability to perform many skills that are inherently needed to be successful and enjoy the activity."

Fifth, general early education teachers are not prepared to teach or promote motor competency because they lack the necessary knowledge and training to do so. Despite that, many general early education teachers are still being tasked as the primary providers of such skills - particularly in low-income or urban areas, where free play may not be provided in school - instead of more qualified and dedicated specialists, such as adapted PE teachers.

We know these general education teachers are doing the best they can, but they're being asked to move a mountain with a shovel. That's neither fair to them, nor to the children they are tasked with teaching. 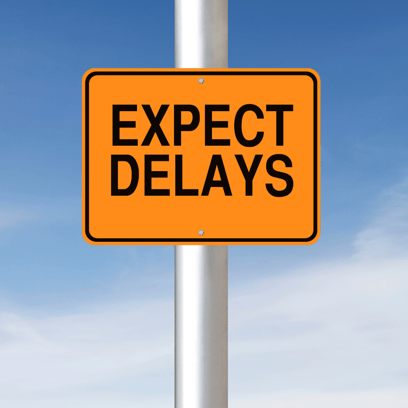 Brian et al. sum up their findings quite nicely:

"Data demonstrated a surprisingly high prevalence of locomotor and object control DD classification in a large and diverse sample of young US children that did not discriminate across sex, race, SES, geographic location, and BMI % classifications. Further, of the investigated explanatory factors, only sex was found to predict object control MC. Research has consistently demonstrated that motor DD can be remediated, but only if it is acknowledged and targeted through daily structured MC curriculums that (1) consider environmental/ecological factors and (2) are taught by trained movement specialists. If the elevated prevalence of DD continues to be neglected, young children will be at risk not only for multiple physical health-related issues, but DD in MC also may impact cognitive and/or social development."

"The findings are clear. It's time to call this what it is: an emerging epidemic."

In other words, there is something that can be done about the growing number of developmental delays in preschool-aged children, but it's going to take a herculean effort to make an impact. Schools will need to re-think how they approach the issue and what solutions they offer to combat it. Passing the responsibility onto standard pre-K and K-5 teachers who aren't trained to remediate these sorts of developmental delays is not a solution, either. Teachers do not need, nor can they support, more weight on their already overburdened shoulders.

Moving forward, schools and school districts will need to hire trained movement specialists, such as adapted physical education teachers and in-building occupational therapists, while also incorporating daily structured activities that promote motor competence. This isn't as impossible as it sounds, though: President Joe Biden has called for a 15.6% increase in education spending for the fiscal year 2023 (which begins Oct. 1). Most importantly, President Biden highlighted the need for an increase in spending for students with disabilities, Title I programs, and school health professionals.

It won't be easy, but there is hope. It has to get done. Our children's physical and/or cognitive development depends on it. 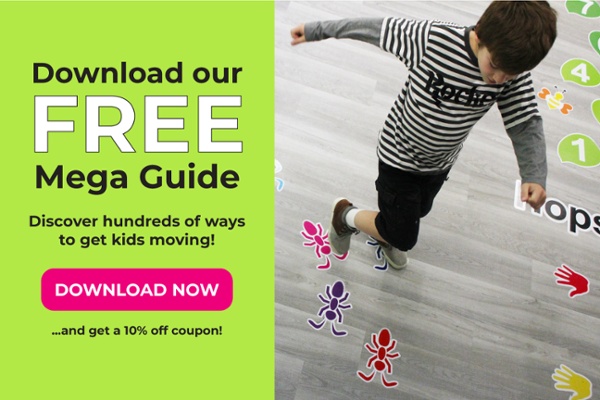